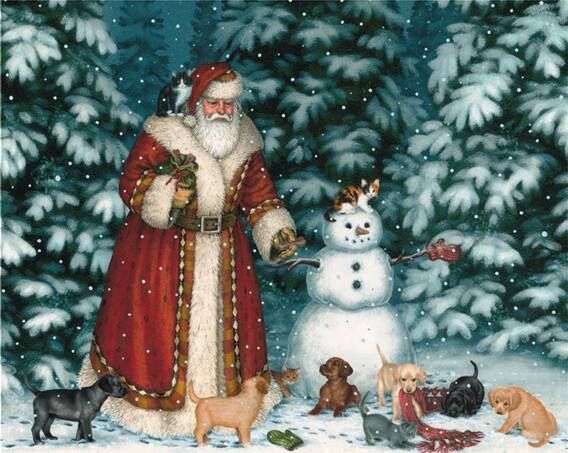 He was a saint, but he was in many ways still as human as any of us. It had been such a long, difficult year. He could feel the pain of so, so many, of the children and the grown-up children alike, all over this world of wonder. Pain. Fear. Despair. The chilling gray of uncertainty. He knew the magic of hope. He embraced the redemptive power of faith. And yet he understood that even the belief in something better might not be enough to cast sufficient light into the darkness.

He also knew that the magic–of hope, of faith, of belief, of light itself–was often the only resource one could summon. The magic could fuel courage, and be fueled by courage in turn. The magic could draw strength from love, and fortify love with strength.

That ache in his shoulder, that heaviness in his chest–did he suffer those mundane ailments a century ago? Did he feel them last year? He couldn’t remember, and he decided it didn’t matter anyway. He had a job to do.

Father Christmas rose from his chair. He wiped away the stray tear that stung his eye, and he hoisted his sack over his back. The damned thing got heavier every year. But he stood, determined and resolute. He was a symbol; he knew his importance and he knew his limitations. He didn’t have Playstations, nor playthings of any kind. No His and Hers sports cars, no Beatles records, not even a fruitcake. The material gifts would be given and received outside of his provenance. His sack was filled with the magic itself: the wishes, the dreams, the prayers for brighter days, and the will to make days brighter to the best of our mortal ability.

As he boarded his sleigh, Father Christmas thought back once again to the words of Robert Frost, the words he recalled every year as he began his miracle trek around the globe:

I have promises to keep, and miles to go before I sleep.

He would not fail. His belief would see him through.

This has been a year unlike any other. We join Father Christmas in believing in brightness ahead, in songs to be sung, in loved ones to be cherished. We have miles to go. But we’ll get there together.

Whatever season you celebrate, we wish you strength and magic. Happy Christmas from Dana and Carl.

THE IDEA: It’s About That Time (Black Vinyl, Yuletunes)

BERK/LEHANE: An Irishman For Christmas (Red On Red, single)

FOUNTAINS OF WAYNE: The Man In The Santa Suit (Virgin, Out-Of-State Plates)

THE JAC [featuring The Christmas Crew]: Won’t Be Leaving Home For Christmas (joealgeri.bandcamp.com)

BUCK OWENS: All I Want For Christmas Is My Daddy (Capitol, single)

MARGO GURYAN: I Don’t Intend To Spend Christmas Without You (Oglio, 25 Demos)

THE SPONGETONES: Carol Of The Guitars (Loaded Goat, Mersey Christmas)