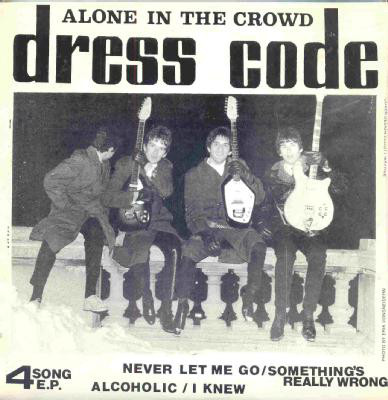 This week, the Central New York music scene mourns yet another bright light with the passing of Eric Mattice. A million years ago, as the late ’70s oozed into the early ’80s, when the drinking age was 18 and clubs teemed with action, with kids lookin’ to bop and with rock ‘n’ roll groups poised to provide the soundtrack, Eric Mattice played bass in a band. That band included Eric, his guitarist brother Elliott Mattice, their guitarist cousin Norm Mattice, their drummer buddy Steve Martell. The band was called Dress Code, and lemme tell ya, Dress Code looked fantastic.

It’s funny that, among all the great things I could say about Dress Code, their fab appearance comes to mind first. They were kids in an era when rock ‘n’ roll kids worshiped Molly Hatchet and Southern rock, and dressed down to type. But Dress Code hated that stuff. They called their music Northern rock. They wanted to be The Beatles, The Kinks, The Ramones, The Jam, and their own local heroes The Flashcubes. More than anything else, I think they wanted to be The Who. They started by deciding to look the part. Everything else fell into place with that decision.

Guitars, bass, and drums. An appreciation of the British Invasion and punk, of The Easybeats and The Monkees, a dedication to making new music inspired by the coolest sounds we all knew.

I don’t believe I ever had an opportunity to meet Eric, Elliott, or Norm, and I only met Steve for the first time at Norm’s funeral in 2016. But I was a fan. When Dana and I were putting together the first Bright Lights! Syracuse new wave reunion show in 2014, Dress Code was near the top of our list of acts we wanted to book. I really wish that could have happened. It was not to be.

But I remember Dress Code as an incredible group of true believers, playing because they meant it, playing because it meant something to them. They were electric, exciting, and so much fun to see and hear–to witness–live. And they looked fantastic. That memory of eternal youth endures. I’ll cherish it for as long as I draw breath.

This week’s TIRnRR celebrated the life of Eric Mattice with spins of all four of the tracks on Dress Code’s 1981 Alone In The Crowd EP, plus Chris von Sneidern‘s musical memoir of the Syracuse scene we all shared, “Insomniac Summer.” We added new music from The Gold Needles, Robert Bidney, Carla Olson & Todd Wolfe, and Glen Burtnik’s Summer Of Love, some old favorites, some recent favorites, and a familiar dedication inspired by the coolest songs we know. We may not look as good as Dress Code. Who could? But we believe, as they did. That belief will guide us through our sets. Godspeed, Eric Mattice. This is what rock ‘n’ roll radio sounded like on a Sunday night in Syracuse this week.

Hey, Carl’s writin’ a book! The Greatest Record Ever Made will contain 100 essays (and then some) about 100 tracks, plus one bonus instrumental, each one of ’em THE greatest record ever made. An infinite number of records can be the greatest record ever made, as long as they take turns. Updated initial information can be seen here: https://carlcafarelli.blogspot.com/2019/05/the-greatest-record-ever-made-and-other.html

THE ZOMBIES: I Love You (Big Beat, Zombie Heaven)

TEGAN & SARA: Walking With A Ghost (Sire, So Jealous)

THE DARLING BUDS: The Other Night (Columbia, Pop Said…)

THE WHO: Out In The Street (MCA, My Generation)

THE GOLD NEEDLES: Sunset Girl (Jem, Through A Window)

THE LOUD FAMILY: We’re For The Dark (Copper, VA: Come And Get It)

JOE JACKSON: Is She Really Going Out With Him? (A & M, Look Sharp!)

THE MONKEES: You Told Me (Rhino, Headquarters)

ROGER McGUINN: Someone To Love (Arista, Back To Rio)

THE COWSILLS: Make The Music Flow (Cowchip, Captain Sad And His Ship Of Fools/II X II)

ELVIS COSTELLO & THE ATTRACTIONS: (I Don’t Want To Go To) Chelsea (Rhino, The Very Best Of Elvis Costello & the Attractions)

DRESS CODE: I Knew (Semaphore, Alone In The Crowd)

THE CLASH: I Fought The Law (Epic, The Essential Clash)

THE O’JAYS: Put Your Hands Together (Epic, Love Train)

DAVID BOWIE: Hang On To Yourself (Virgin, Bowie At The Beeb)

THE KINKS: Till The End Of The Day (Sanctuary, The Ultimate Collection)

THE BEVIS FROND: I Got Eyes In The Back Of My Head (Rubric, Inner Marshland)

THE BUZZCOCKS: Ever Fallen In Love (IRS, Singles Going Steady)

PEZBAND: Back In The Middle (Jem, Cover To Cover)

THE ENGLISH BEAT: Mirror In The Bathroom (IRS, What Is Beat?)

THE ZOMBIES: Just Out Of Reach (Big Beat, Zombie Heaven)

JIM BASNIGHT: Best Lover In The World (Precedent, Not Changing)

KISS: Shout It Out Loud (Mercury, The Very Best Of KISS)

THE ZOMBIES: Tell Her No (Big Beat, Zombie Heaven)