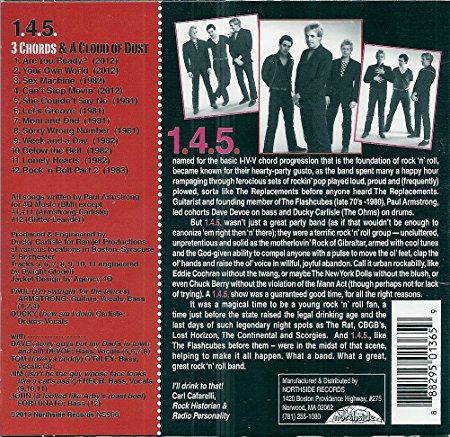 I first saw 1.4.5. in the summer of 1980 at The Poor House North, a bar in the Syracuse suburb of Liverpool, New York. It was a weird night. I had graduated from college in May, and decided to stay in Brockport with my girlfriend Brenda. We were back in Syracuse for a visit, and we saw that Paul Armstrong’s new band 1.4.5. was playing on a bill with Screen Test, another new band comprised of PA’s former partners in The Flashcubes (Gary Frenay, Arty Lenin, and Tommy Allen). Given the acrimonious split of the original ‘Cubes lineup the year before, I was surprised that the two acts were sharing a bill. I was a fan of all of them, and I couldn’t miss this.

Alas, there were complications getting there in time for the show. We were going with my friend Jay, with whom I’d gone to see my first Flashcubes show in early 1978. Another friend of ours had decided it was time to leave her home in North Syracuse, California on her mind. So we all stopped for a sumptuous dinner at Pudgies Pizza, the other patrons radiating the familiar scorn of the righteous gazing upon the misfits. We dropped our friend off at a budget motel, where she would hole up before taking the next step in her journey to the greener pastures of Anywhere Else. She was 19. We all wished her our best. We wouldn’t speak again for another four years. Greener pastures proved elusive.

By the time Jay, Brenda, and I got to The Poor House North, we’d missed the opening set by The Dead Ducks Band. The perils of bein’ a pal! But we were there in time for The Works, Screen Test, and 1.4.5. It was a magnificent night of rockin’ pop music, culminating in an on-stage reunion of the original Flashcubes, Paul once again joining his once and future mates for a romp through his signature ‘Cubes tune “Got No Mind.” And all was right with the world.

I can’t convey how much I loved this period in Syracuse music. I don’t mean just the brief heyday of The Flashcubes, but also all that followed in the early ’80s. Maybe the feeling is given an added patina by my absence from it; living in Brockport, the bright lights and starry nights of Syracuse noise seemed so far away, out of my reach. Syracuse wasn’t exactly a teeming metropolis, but it was a city, and there was a lot more happening there than in the little village of Brockport. I’d made a choice to pursue my own vision of greener pastures. It was the right decision. But I missed the music of my homeland, even from a mere two-and-a-half hour bus ride away. It might as well have been measured in light years.

Still, I did make it back to Syracuse a few times, and I saw Screen Test and 1.4.5. any time I had an opportunity to do so. Man, they were such great groups, both of them. I saw them together one more time, on my last-ever visit to The Jab up at Syracuse University, a show which again culminated in a united performance of “Got No Mind.” I saw Screen Test at The Firebarn. I saw 1.4.5. at Squires East. And that was probably it. The time slipped away from me, irrevocably. I knew it was special. And I could not hang on to it, no matter how hard I tried. The drinking age changed. The clubs closed. Bands broke up, or moved on. Maturity beckoned.

Somewhere in there, I kinda sorta grew up a little bit nonetheless. But I was never so foolish as to relinquish my appreciation of what I’d experienced, my conviction in the sheer wonder of what I’d heard. Nothing has changed that, and nothing ever will.

This Friday, May 25th, 1.4.5. will return to Syracuse for a show at Funk ‘N Waffles, on a bill with 61 Ghosts, The Mickey Brown Band, and The Johnny Thunders Orchestra. On This Is Rock ‘n’ Roll Radio, we celebrated the music of our Featured Act 1.4.5., along with new music from Lisa Mychols, Diamond Hands, Marc Jonson, Jerry Hull, and Disconnected Genius, and the transcendent buzz of The Romantics, The Sensational Alex Harvey Band, The Dave Clark Five, KISS, Ian Hunter, The Smithereens, Apples In Stereo, Iggy & the Stooges, The Kinks, The O’Jays, April Wine, The Monkees, Johnny Thunders, Sly & the Family Stone, and The Beatles. It never does get old. Let’s groove! Greener pastures await. This is what rock ‘n’ roll radio sounded like on a Sunday night in Syracuse this week.

This Is Rock ‘n’ Roll Radio with Dana & Carl, Sunday nights from 9 to Midnight Eastern, on the air in Syracuse on The Spark WSPJ-LP 103.3 and 93.7, and on the web at http://sparksyracuse.org/

Spark Syracuse is supported by listeners like you. Tax-deductible donations are welcome at http://sparksyracuse.org/support/

THE ROMANTICS: In The Nighttime (Nemperor, Strictly Personal)

THE DAVE CLARK FIVE: Glad All Over (Hollywood, The History Of The Dave Clark Five)

THE SEARCHERS: Hearts In Her Eyes (Sire, The Searchers)

IAN HUNTER: All The Way From Memphis [live] (EMI, The Best Of Ian Hunter)

THE ZOMBIES: She’s Not There (Big Beat, Zombie Heaven)

THE O’JAYS: For The Love Of Money (Sony, VA: A Salute To Black Entertainers)

THE MONKEES: You Told Me (Rhino, Headquarters)

THE SMITHEREENS: Behind The Wall Of Sleep (Capitol, Blown To Smithereens)

THE CHOIR: If These Are Men (Omnivore, Artifact)

THE FLASHCUBES: Got No Mind [live] (Northside, Bright Lights)

THE WHO: Substitute (Decca, Meaty Beaty Big And Bouncy)

IGGY & THE STOOGES: I Got A Right (Easy Action, Heavy Liquid)

LOU REED: Walk On The Wild Side (Columbia, VA: 20 Feet From Stardom OST)

THE KINKS: Tired Of Waiting For You (Sanctuary, The Ultimate Collection)

BIG STAR: I’m In Love With A Girl (Stax, The Best Of Big Star)